Getting to know the staff

Jean Paul Coffy, a.k.a. "Coffy", was born in Port-Au-Prince, Haiti and came to live in Chicago in September 2001. 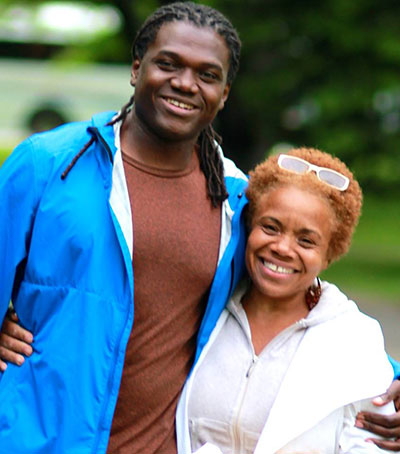 Coffy has been the lead teacher at La Grande Famille for 10 years. Coffy received his degree from the Academy of Music in Haiti and early childhood degree in the Waldorf education system. Prior to his teaching career, Coffy traveled the world as the lead musician for a folklore band called "Boukman Exsperyans". He speaks English, French, Haitian Creole, and the universal language of music!

Yakini-Ajanaku-Coffy was born in Chicago, and studied business management at Spelman College in Atlanta, Georgia. She worked at the Haitian Consulate in Chicago when she met Coffy during one of his musical tours. After living in Haiti for a few years, they returned to Chicago. With two young children at home, (Ade and Akin, who are now 16 and 19 years old) Yakini decided to quit her corporate career and pursue a path that would keep her closer to home and allow her to spend more time with the family.

That is when they started La Grande Famille (with Yakini's mother). She handles all administrative matters and helps Coffy with the implementation of the curriculum. She loves singing, planning and preparing the meals for the children. Yakini strongly believes that at the heart of care-taking is "creating for our children an extension of their homes, along with an exciting educational component".